Jeffrey Schloesser, author of Marathon War, will be here to sign his books Saturday, September 25th at 5:30 pm. Join us! 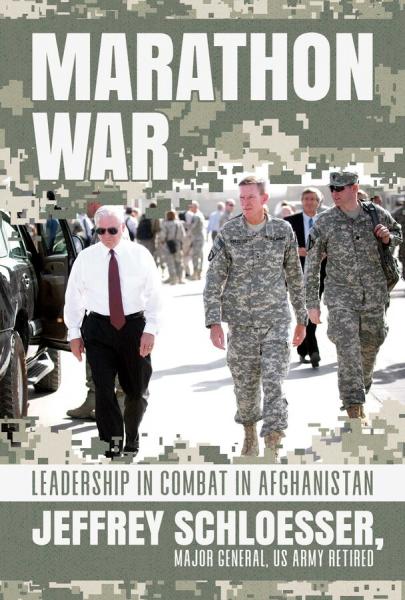 From Major General Jeffrey Schloesser--former Commanding General of the 101st Airborne Division and Regional Command-East--comes a revealing memoir of leadership in the chaos and fog of the Afghanistan War.

War is the most brutal of human endeavors, and I have experienced enough war to know to take cover when politicians and poets and armchair warriors speak extravagantly of patriotism and national honor.

Join Major General Schloesser in the daily grind of warfare fought in the most forbidding of terrain, with sometimes uncertain or untested allies, Afghan corruption and Pakistani bet hedging, and the mounting casualties of war which erode and bring into question Schloesser's most profoundly held convictions and beliefs. Among several battles, Schloesser takes readers deep into the Battle of Wanat, where nine U.S. soldiers were killed in a fierce, up-close fight to prevent a new operating base from being overrun. This encounter required Schloesser to make tactical decisions that had dramatic strategic impact, and led him to doubts: Can this war even be won? If so, what will it take?

This book is a rare insight and reflection into the thoughts of critical national decision-makers including President George W. Bush, Secretary of Defense Robert Gates, then Senator Barack Obama, and numerous foreign leaders including Afghan President Hamid Karzai. Key military leaders--including then Chairman of the U.S. Joint Chiefs of Staff Admiral Michael Mullen, then Central Command Commanding General David Petraeus, then Lieutenant General and future Chairman Martin Dempsey, and International Security Force Commander General David McKiernan--all play roles in the book, among many others, including Chairman of the Joint Chiefs General Mark Milley and Army Chief of Staff General James McConville. Analyzing their leadership in the chaos of war Schloesser ultimately concludes that successful leadership in combat is best based on competence, courage, and character.

Jeff Schloesser is a retired Army Major General who commanded the 101st
Airborne Division for thirty-three months, including fifteen months in combat in
Afghanistan. In his thirty-four-year Army career, he served in Afghanistan, Iraq,
Kosovo, Albania, Kuwait, Haiti, Jordan, South Korea, and twice in Germany.
Born into an Army family, Jeff lived across the U.S. and also in Germany, moving
every few years as a child. After graduating from the University of Kansas, he
enlisted in the U.S. Army and attended Officer Candidate School, and was
commissioned a Second Lieutenant in the Corps of Engineers. He married his high
school sweetheart, Patty Drysdale, and they lived the next three plus decades all
around the world, raising two children, Ryan and Kelly.
Jeff enjoyed leading Soldiers and served as a platoon leader three times in three
different units and a company commander of 180 soldiers in South Korea. He
commanded two special operations battalions, including one deployed to Haiti,
and an aviation brigade in Germany, Albania and Kosovo. He was the first Global
War on Terrorism Planning Director in the Pentagon after 9/11, and the first
Deputy Director at the National Counterterrorism Center for Strategic Operational
Planning.

Additionally, he served as an assistant division commander in combat in Iraq, and
a division and combined joint task force commander in Afghanistan, ultimately
commanding over thirty-thousand troops from the U.S., Poland, France, and
several other allied countries.
During his military career, Jeff served as a combat engineer, an Army Aviator, a
Special Operations Aviator, an Army Foreign Area Officer for the Middle East, an
Army Strategist, and Counter Terrorism specialist. He graduated from the Defense
Language Institute (Arabic), Georgetown University’s Masters of Science in
Foreign Service program, and was a National Security Fellow at Harvard
University’s John F. Kennedy School. He served at the U.S. State Department and
in the U.S. Embassy in Jordan and Kuwait.
Jeff and Patty live in Park City, Utah, and Washington, DC, where he works for a

technology company focused on vertical lift flight. Jeff, Patty, and their Border-
Doodle pup “Otis” can be found hiking or snowshoeing in the mountains around

their home. Jeff runs, mountain bikes, and swims, and competes with his
daughter in a couple of triathlons. He has completed thirty-eight marathons. Their
son Ryan is an Army officer with two children and their daughter Kelly is a senior
manager at a global consultancy.