Join us in welcoming back local author Terry Sidford, with her second book Truth, Courage, Love! 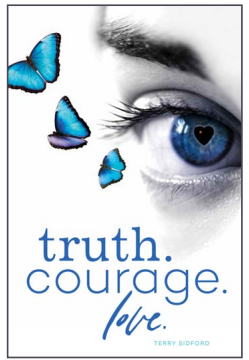 Life seemed happy and ordinary for smiling, imaginative, five-year old Terry Sidford. She had two loving parents, a brother, and a sister, all of whom lived in a beautiful house with a pool on the Southern California coast during the 1970s. Life couldn’t have been more perfect. Until… One night Terry unexpectedly heard her parents arguing loudly, and in that instant everything changed. Over a short time, the arguing escalated, her mother started drinking heavily, and her father eventually moved out, leaving Terry and her siblings to deal with an alcoholic single mom. So begins the journey of an intuitive child growing in a split family where each member struggles to survive. Terry’s story starts with sadness, resentment, and confusion, but ends in forgiveness, trust, and love, with a lot of lessons learned in between. She shares the tools you need to survive, and even thrive, as a result of your past experiences, no matter how relentless they may feel..
A child of the 1970s, Terry Sidford didn’t realize she was born into an unhappy marriage until the age of #ve, when drinking tore the family apart. In an attempt to escape her mother’s issues with alcohol, Terry and her sister run away from home one night to join their alternative-lifestyle father, in the hope that they might #nd some adult stability. "us begins Terry’s unconventional “Wonder Years,” in which she endures an absentee mom, teenage self-improvement bootcamp, and an educational system that misdiagnoses her sensitivity and intuitiveness as learning disabilities. Join speaker, author and popular life coach Terry Sidford on her journey, in which she shares the secrets of how to use your worst experiences to become the best version of yourself.
“After experiencing a tumultuous, unconventional childhood, I can safely say that I now know what truth is, it will set you free, and I fully trust it,” said Terry. “I recognize truth by unconditionally seeing everything for what it is, rather than making it something di%erent to "t a convenient narrative.” Truth brings courage and courage opens you up to love. With these three things you can transform your life of trials to triumphs and success. Terry wants to help everyone learn how to recognize their own truth, be courageous, and lead with love regardless of their life experiences. “Which is why I wrote this book.”

About the author:
Terry is a sought-after motivational TEDx speaker, Author, Television Host and Life Coach since 1998. She has assisted scores of people and organizations in achieving their dreams, which she believes is her own life’s purpose. Terry’s greatest joy has always been to help others unleash their potential and live life to the fullest. Based on her success as a professional coach and thought leader, in her research on the bene"ts of owning your courage, she has been asked to speak at many personal growth and business-related events. She has spent over half her life acquiring the knowledge and experience that qualify her to guide others. $e acquisition of those experiences is the basis for her book One Hundred Hearts: Inspiring Stories from the Women Who Lived "em, a collection of stories of female courage in the face of adversity. Terry is also a certi"ed Passion Test facilitator, accredited Pilates instructor, author of two books and a popular newsletter that showcases her personal experiences and insights, as well as a regular contributor to a national wellness magazine, "e Great Health Guide.